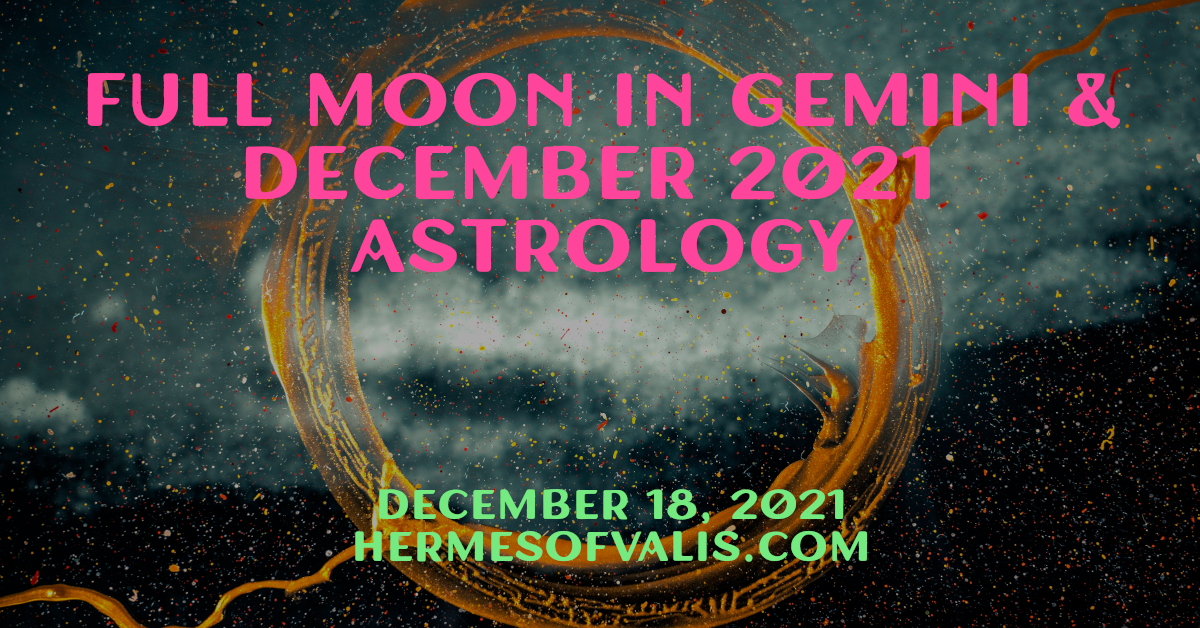 During this Mercury-ruled Full Moon, Mercury squares Chiron, who is in the middle of stationing Direct. Important conversations can be very illuminating at this time. New information may come to light that has been brewing under the surface since the Solar Eclipse. This info relates directly to our Chiron story of inner wounding and will propel us to take a stand for ourselves. But it also has a lot to do with Venus Retrograde.

Third Decan of Gemini: The 10 of Swords

The story here is of shedding an old way of thinking. We have to adapt, as we’ve come to a place where what we once thought to be true is no longer the case. This is the end of a worldview that we’ve held, which can come as a betrayal. From here we have to rebuild, and the Venus Retrograde will help us figure out what is most important from here.

Although this is a painful process depicted by a man lying prone with ten swords in his back, many people read the “Okay” hand gesture as this figure saying everything’s going to be fine. This is the end of the suit of Swords, representing completion and the finality of an idea or belief. The tens of the Tarot are like a turning point, where we can transition to something new again as we cycle back to the Ace.

The Ace of Swords as the beginning of the New Year encourages us to cut through the bullshit and get straight to the truth. Objectivity, honesty, and justice can guide us forward as we embrace a new way of thinking, a new idea or belief, or a new attitude.

The third decan of Gemini is ruled by the Sun and Saturn. This is the point where Gemini needs to stop hemming and hawing and come to a decision that will support growth and self-development. “Kill your darlings” and commit to your chosen path or idea with confidence.

We’re in a strange, portally time, from the Solar Eclipse in Sagittarius straight through to the New Year and the following New Moon in Capricorn on January 2. This in-between zone involves the changing tides of Jupiter entering Pisces and Venus stationing Retrograde in Capricorn. Not to mention adjusting to life changes that are pending for many following a crazy Eclipse season!

Chiron and Neptune will station Direct during this time, making December a pivoting point in our individual Chiron and Neptune stories. This can be touchy, but also deepen our healing and understanding of themes in our lives stemming from events in 2011-12 and changes that started taking root in 2018-19.

The month begins with Neptune stationing Direct at 20° Pisces. Here he stands again, at the very beginning of the third Face of Pisces. To help you understand the role Neptune’s playing in your life, the story can be divided into three chapters, one for each decan of the sign. I’ve talked about this here.

You can also look at the dates when Neptune has been stationing to see if they relate to any important relationships or anniversaries. The station points happen around the same time every year. Neptune stationed Retrograde on June 25 and is Direct again as of December 1. These dates will be more significant to your personal Neptune story if you have any placements around 20-23° of mutable signs (Gemini, Virgo, Sagittarius, and Pisces).

What does it mean if you have an important placement affected by Neptune? It depends, but Neptune can have a mystical, creative, spiritual, imaginative effect on you, or it can have a confusing, dissolving effect. Romance and magic can have you frollicking in a field of flowers wearing rosy-colored glasses, or you could be in the midst of a total identity crisis or mutation (especially if it’s touching your Sun). Thanks, Neptune! For being so clear about that….

Are you dealing with Neptune? We can talk about that in a session together.

On December 13, Mercury enters Capricorn. Mercury is now entering the Waning Epimethean phase of his cycle, where he’ll gradually start to set after the Sun. This means we’ll start to be able to see Mercury on the Western horizon after sunset. As he winds down, he’ll prepare for his first Retrograde cycle of 2022. He’ll be Retrograde in Aquarius again from January 14 until February 3.

While in Capricorn, Mercury gives discipline, order, and structure to our thoughts and mental activities. This is always a helpful energy as we reset and examine our goals for the New Year. Since he’s still moving pretty swiftly, he’ll only spend two weeks in industrious Capricorn, so make the most of it.

Mars also changes signs on the 13th, moving from his home sign, Scorpio, into the more effervescent Sagittarius. Energy levels bounce up, impulses win, and enthusiasm reigns supreme! If you aren’t feeling very enthusiastic, you’ll at least be restless and ready for action. We’re motivated by our beliefs and impulses at this time.

Mars will be on the South Node on December 15. Pay attention to your personal themes around the Solar Eclipse in Sagittarius earlier this month, especially as we head into the Full Moon.

The day after the Full Moon, Venus stations Retrograde! Over the next three months, she’ll explore the territory between 11-27° Capricorn. It’s three months and not one because of the pre- and post-Retrograde shadow zone, which starts November 17 and ends March 1.

If you have placements between 11-27° of the cardinal signs (Aries, Cancer, Libra, and Capricorn), then this Retrograde is going to be big for you. Check out my free Venus Retrograde overview here.

On the same day the planet of love stations Retrograde, Chiron the sensitive Centaur stations Direct! Chiron has been going over 8-12° Aries, challenging us to work on our independence and assertiveness. If the wounded healer has been affecting your chart, it can bring up insecurities and old wounds that you carry when he aspects your planets.

Events around the day of the station can be important if you have anything from 8-12° Aries, Cancer, Libra, or Capricorn. This would also have been important during the last Mercury Retrograde, which was tied in with Chiron.

The Sun sextiles Jupiter that same day. The optimistic outlook that these two can produce helps us navigate the tenderness of Venus and Chiron with some grace and positivity. Good fortune is in the air, which can support our healing and integrating of important lessons, even as we get ready to reexamine our values and desires during Venus Retrograde.

Mercury trine Uranus on December 20 is an exciting, stimulating energy that opens us up to new ideas and experiences. Between this and Sun sextile Jupiter the previous day, there could be some good news coming to us after the Full Moon. We’re more mentally alert with a heightened awareness under this transit. This favors discovery of key insights and breakthroughs, divination, and dream work.

The Sun is in Capricorn from December 21 to January 19 this year.

Winter Solstice is a time of finding hope even in the darkness, as the longest night gives over to the slowly lengthening days that will bring us through Winter. The old god is reborn and there’s a promise of the returning light.

Last year on the Winter Solstice, we had an amazing Mercury Cazimi moment AND Jupiter-Saturn conjunction in Aquarius. That was the day that my most positive, angelic candle series was born (XVII. The Star).

This year we have Jupiter in Pisces to look forward to. Although it will be a brief transit, it should help to lift us up and give 2022 an optimistic start.

Saturn squares Uranus for the third and final time on December 23. Previous dates of this transit were June 14 and February 17. Rick Levine has a good Youtube video on this.

This is a major transit affecting the collective and major changes over the long term. The current Saturn-Uranus cycle began in Sagittarius in 1988 (actually in the same position as the Sun during this Full Moon in Gemini).

Venus is conjunct Pluto for the second time on Christmas. This brings more intensity into relationships of all kinds. We’ve just come out of Eclipse season and Holiday plans are likely a little awkward still with Covid ongoing. This is Venus deep in the snowy woods like a little red riding hood, being swallowed by the night. I see this as a mystical journey, sort of like entering a dark labyrinth at night with lots of low-hanging fog and many twists and turns (poor Cedric Diggory… poor Harry! Don’t you just wanna hug him?).

Mars trines Chiron on the 25th as well, which can actually be an asset in helping us stand up for ourselves or do some more healing activities. Watch for fiery tempers and woundedness. People are more likely to lash out like flames as they do the work of understanding who they are and how they’re supposed to operate. Maybe try to avoid hot button issues when gathered with family, unless you’re looking to stir the pot, of course.

This Christmas, whether you celebrate or not, whether you’re alone or not, honor both your hunger for more and your personal boundaries. You get to determine how you rule your own space. Being in the woods of Venus Retrograde this Winter Solstice, we encounter an incredible source of power and mystery in the darkness (Pluto!). Learn how to wield that power without letting it wield you. This is about coming to understand our core values and our self-worth.

The Last Quarter Moon in Libra is the day after Christmas, giving us a chance to recalibrate as we put a wrap on this Solar Eclipse cycle and this whole year. People all over the world are hopeful for the new chance 2022 inspires. There is so much power in holding that hope. And in two days, Jupiter will be in Pisces and it will feel like everyone takes a big sigh of relief.

Mercury will sextile Neptune as well. This echoes the message of spiritual beauty and the mystical power of positive thinking.

Jupiter enters his home territory of Pisces on December 28. He gave us a little preview of his time here from May 13 to July 28, 2021. This was a more optimistic time when vaccines were first rolling out and there was a feeling that we could return to normal life. Jupiter’s ingress back into Aquarius coincided with a harsh reality adjustment that it wasn’t going to be that easy.

Jupiter stationed Direct on October 17, initiating his moving back toward Pisces. Slowly but surely he’s inching his way back to believing that anything is possible. He won’t spend a lot of time in Pisces, however. Before the next Solstice has arrived, he’ll already be bounding ahead into Mars-ruled Aries. It will be important to take advantage of the positivity Jupiter brings while he’s in Pisces while we have such a great energy to work with.

December 29th there is a Mercury-Venus conjunction. Mercury zips through Capricorn so swiftly that he only makes one connection with Venus here. But this will be an important opportunity to think and talk and write about our ideas concerning all the big Venus topics: love, money, contracts, values, and property. If you have a significant conversation that needs to happen, now would be the time.

The Sun squares Chiron this day, signifying that these conversations or the situations surrounding them are not always easy. But with Mars sextile Saturn, we have the tenacity to put plans into motion. We want to see progress and we’re willing to put in some hard work.

2021 ends with an intense Mercury-Pluto conjunction, inviting us to explore the depths as we contemplate the end of 2020-2021. It is certainly true that nothing will ever be the same. But how have we changed and what are we walking into? Now is the time to focus your mind with determination, planning the tasks that will bring you success in the New Year.