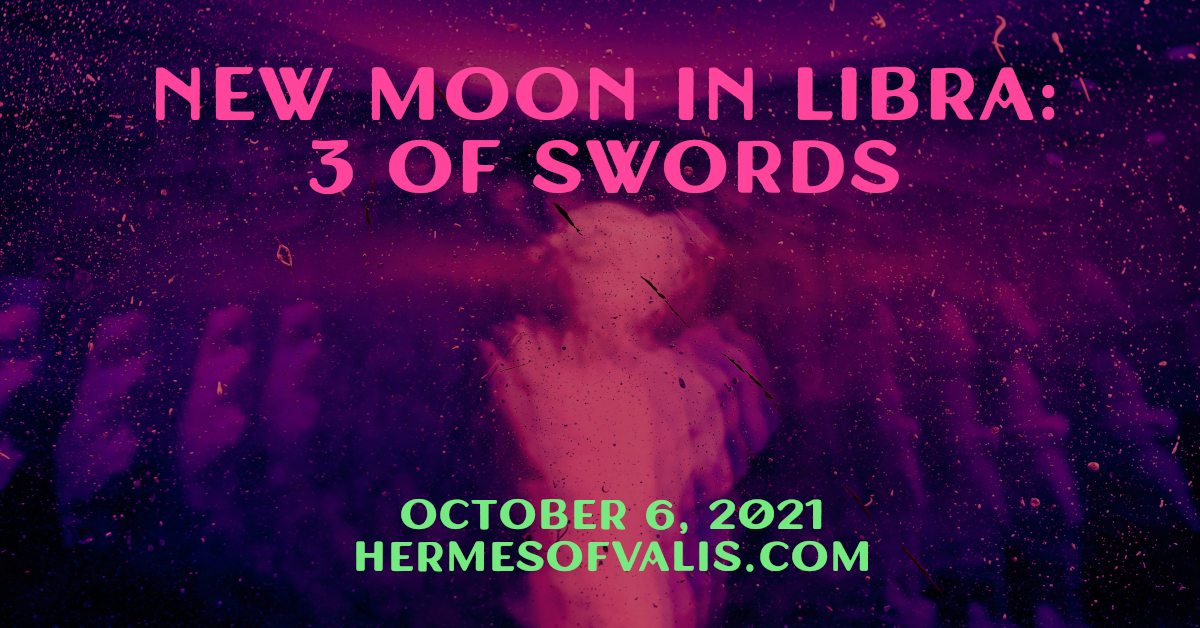 The second decan of Libra is doubly-ruled by solemn Saturn, a planet who finds his exaltation here. It’s with a serious mindset that he weighs out what is balanced and fair. He tells us what is due in recognition of hard labor and time, and what’s owed at the hour of reckoning. As Saturn stations direct on October 10th, his rulership of this decan shouldn’t go unnoticed. He alerts us not just to the injustices of the world but to the beautiful sadness of reality. Everything good comes with limitations.

The 3 of Swords: Lord of Sorrow

It’s important to remember that this card belongs to the Air element. It can be easy to forget this, because the imagery evokes feelings of sadness and betrayal. It isn’t necessarily the feeling of sorrow, which is more the territory of the 5 of Cups. Paul Foster Case sums it up greatly with the phrase “understanding gained through sorrow” (in Oracle of the Tarot, 1933).

This card draws our attention to the rather sobering, Saturnian facts of reality. Everything good must come to an end, but we are better for the experience. Saturn governs loss, grief, and limitations that are are outside of our control. These are the sad, cold hard truths of the universe. But without these boundaries there would be no container for the experience – of life or of love. It advances our knowledge and understanding of ourselves and the world around us.

This card can show loyalty toward fulfilling spoken promises, pacts, and deals. Some of the decanic imagery involves two people marrying each other. It can bring separation and disruption, but it can also say something about a serious commitment. It’s the bond of word that recognizes the severity of “till death do us part.”

This isn’t always easy work; nothing will be the same on the other side. With Pluto and Saturn, we have to embrace the shadow. We have the opportunity to learn and grow through this cathartic experience as Pluto resurrects the dead.

On the day of the New Moon, Pluto stations direct, having traveled over 24° 18′ – 26° 48′ of Capricorn. Placements between 24-27° of the cardinal signs (Aries, Cancer, Libra, & Capricorn) will be particularly impacted. Pay attention to events and feelings on the three days around the New Moon.

During the month ahead, the planets forming today’s New Moon in Libra will all go on to square Pluto. This process has us digging deep into the forbidden materia, secrets, power dynamics, and underworld that he represents. This begins on the night of the New Moon, when Luna squares Pluto Direct at 10:03pm PT.

The Sun (our sense of self, ego, and self-expression) squares Pluto on October 17. This is just a few days before the Full Moon in Aries. This can bring up power struggles and the need for control. Just after the Full Moon, Mars (our willpower, drive, and passion) squares Pluto on October 21. The two co-rulers of determined Scorpio fuel personal ambition with a cutthroat spirit.

The third hit of Mercury square Pluto happens on November 2 (with previous dates being September 22 and October 1). This transit stirs up trouble in the form of deep or penetrating communications that get to the root of something. Long-slumbering, hidden things awaken to the light of day.

Saturn stationing Direct marks a turning point in the Saturn cycle. It represents long-term goals, projects and plans that you’ve been carefully executing and working hard at.

Saturn is reviewing some of the same territory that Mercury explored during the last Mercury Retrograde in Aquarius (February 2021). Mercury went through 11-27°, making the 2nd decan of Aquarius particularly important now.

Jupiter ends his Retrograde the day before Mercury, on October 17. This journey has explored the territory between 22° 19’ Aquarius and 2° 11’ Pisces. This affects 0-3° of the Mutable signs (Gemini, Virgo, Sagittarius, & Pisces); 22-30° of the Fixed Signs (Taurus, Leo, Scorpio, and Aquarius).

This is a turning point in the Jupiter cycle, which represents our higher mind, beliefs and spirituality.

Mercury begins a new cycle on October 9th (at 16° 35’ Libra). The cycle will culminate in Sagittarius on the South Node on November 28, 2021 (at 7° 10’). Check the Houses in your chart where Libra and Sagittarius are.

The new mental/communicative cycle can do with writing, speech, and your personal thought process. It sets down roots now in the House that Libra rules. The cycle builds towards the area of life represented by the House covering Sagittarius in your chart.

Taking this in mind, lay down your plans for the next two months now. Mercury is still Retrograde and wanting us to turn our thought process inward until October 18. Following this, Mercury will go over the same territory one last time. Then he clears the shadow of his retrograde on November 2. The station aligns with the Full Moon and the shadow ends in time for the next New Moon (in Scorpio).