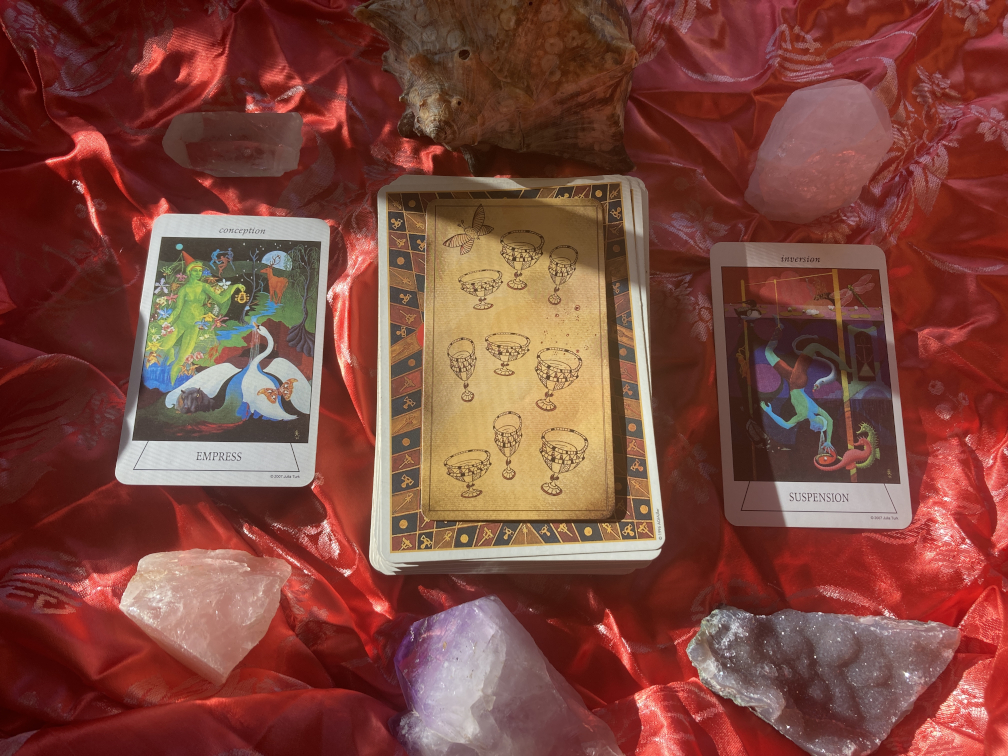 Questions to ask on the New Moon:

This New Moon in Pisces, like every New Moon, is tied into a longer cycle, too. It will reach fulfillment on some level during the next Full Moon in Pisces, which will happen on September 20, 2021.

Think about what House Pisces rules in your chart. What are the themes of this House? Then consider where you want to be concerning these areas of your life by the end of September. This can help guide you as to the next steps that you might want to prioritize moving into this cycle.

The New Moon is in the third decan of Pisces at 23° 03′. This decan is ruled by Mars. This decan is even more significant right now and for the next 5 years. This is because Neptune resides here from February 2021 until he finally leaves Pisces in 2025-26 (more details on this below).

The decans of any sign tell a story in 3 Acts. Let’s explore the story of Pisces as told in the Tarot: the 8 through 10 of Cups.

The 8 of Cups is about moving on from an emotionally stagnant or draining situation. It’s a card of withdrawal. We remove ourselves from established relationships and attachments that have become burdensome in some way. There’s often grief or lingering attachment here as we lament having to leave something or someone behind that we still love in many cases. There may be sadness that our expectations can’t be met or guilt for walking away.

This decan is ruled by Saturn and is very clearly about setting emotional and spiritual boundaries for ourselves. It is also the wisdom of facing the pains of solitude and withdrawal when necessary for one’s spiritual growth. The figure in the card is turning away from the 8 cups (his emotional attachment) to walk alone into the mountains, embarking on a spiritual sojourn. This is Jupiter’s path of higher learning and the need for growth.

The 9 of Cups: Lord of Happiness (Jupiter & the Moon) — Pisces Decan 2

The 2nd decan of Pisces is the 9 of Cups, the Lord of Happiness. This is known as the wish fulfillment card.

Here we have emotional satisfaction from having our wishes fulfilled and our desires met. We’re rewarded for cutting ties in the previous card. We cut loose from that which was no longer supporting growth and something stronger blooms in its place. We’re able to meet our own needs instead of depending on other forces to do it for us.

In the traditional image of the 9 of Cups, a man sits smugly guarding his bounty. There’s an implication of alcohol intoxication with this card. Not of overindulgence but of contentment. Jupiter revels in pleasurable things and lofty highs, while the Moon speaks to having our needs met.

The 3rd decan of Pisces is the 10 of Cups, the Lord of Satiety.

Not only is the third decan a place of culmination, but Pisces itself is also the last sign of the Zodiac. Numerologically, the number 10 is about completion as well. 10s in the Minor Arcana represent the achievement of the suit that they belong to, and the fullest expression of their element.

As the height of emotional fulfillment, the 10 of Cups represents emotional security. Ruled by passionate and driven Mars, this is the moment when our innermost desires are realized. It goes beyond wish fulfillment. It is the emotional contentment of the soul when it has realized its journey.

The most significant astrological event around the time of the New Moon is the Venus-Neptune conjunction that occurs the same day (at 8:08pm PT).

Venus conjunct Neptune in Pisces is dreamy, romantic, empathic, and creative. We’re easily moved by works of art and affected by hidden elements in the world around us. Our senses may seem more alive as we melt out of our rigid layers and swim somewhere in between fantasy and reality.

Looking at the dates when Neptune is in the 1st, 2nd, and 3rd decans of Pisces can reveal an interesting growth pattern in an individual’s life. Each decan holds 3 time segments of Neptune’s story: an introduction period, a main storyline section, and the denouement or resolution period.

Neptune in the 1st decan of Pisces: The 8 of Cups

Neptune first ventured into Pisces (starting naturally with the first decan of the sign) in April 2011. The Lord of Indolence prepared us for where we currently stand by clearing away past attachments and forcing us to turn down different paths. Here are the dates for Neptune in the 1st decan of Pisces:

Neptune in the 2nd decan of Pisces: The 9 of Cups

The 2nd decan is called the Lord of Happiness, but not everything that happens during this time period is going to be happy. For example, this is an important axis in my own chart and Neptune’s passage through here corresponded to a major (challenging) life event, a death in the family. At the same time some of the greatest gifts came to me and I can point to several actual wishes that were fulfilled during this period.

Neptune in the 3rd decan of Pisces: 10 of Cups

Neptune has only just started the main storyline section of his time in the 3rd decan of Pisces. Starting February 21, 2021, we’re entering the final chapters of Neptune’s time in Pisces. This can be considered the ultimate culmination of the journey we initiated when we started to let go in 2011.