Saturn-ruled Patchouli is rich and sensuous, corresponding to the Earth Element. It has a musky smell that people tend to either love or hate. Patchouli is decidedly grounding and brings one into their body and the material plane; it is deeply rooted with a warm, spicy scent.

Scroll down for more information about this candle.

This is an all-natural soy wax candle in an 8-ounce travel tin, which comes with a lid. Each hand-poured ritual candle is made using principles of eclectic green magick, astrology, divination, and aromatherapy. It is made with pure essential oils and natural wicks that are lead and zinc free.

This candle is formulated to the planet Saturn in the sign of his rulership, Capricorn, which corresponds to The Universe/World and The Devil cards in the Major Arcana of the Tarot, as well as the Queen of Pentacles. The candle’s color is a deep black. The scent is a single note of rich, earthy Patchouli.

The limited Saturn in Capricorn black patchouli candle is made to assist one in setting out to do the work. It promotes endurance, material ambition, tactical thinking, and maintaining a serious mindset. Fortuitous for business success, acquisition, laying out contracts and systems, attracting money in exchange for work, and attaining recognition for worldly achievements.

[The World, The Universe, or Time:] The four living creatures of the Apocalypse and Ezekiel’s vision are grouped about an elliptic garland, as if it were a chain of flowers intended to symbolize all sensible things; within this garland there is the figure of a woman, whom the wind has girt about the loins with a light scarf, and this is all her vesture. She is in the act of dancing, and has a wand in either hand. It is eloquent as an image of the swirl of the sensitive life, of joy attained in the body, of the soul’s intoxication in the earthly paradise, but still guarded by the Divine Watchers, as if by the powers and the graces of the Holy Name, Tetragrammaton, JVHV–those four ineffable letters which are sometimes attributed to the mystical beasts. Éliphas Lévi calls the garland a crown, and reports that the figure represents Truth. Dr. Papus connects it with the Absolute and the realization of the Great Work; for yet others it is a symbol of humanity and the eternal reward of a life that has been spent well.

It represents also the perfection and end of the Cosmos, the secret which is within it, the rapture of the universe when it understands itself in God. It is further the state of the soul in the consciousness of Divine Vision, reflected from the self-knowing spirit. But these meanings are without prejudice to that which I have said concerning it on the material side. It has more than one message on the macrocosmic side and is, for example, the state of the restored world when the law of manifestation shall have been carried to the highest degree of natural perfection.

There are no reviews yet. 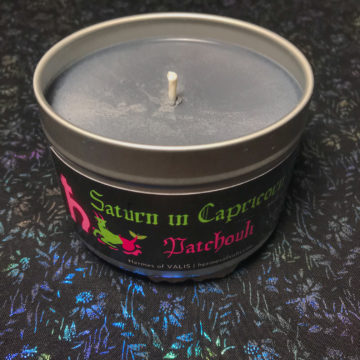 You're viewing: Saturn in Capricorn (Patchouli) Candle $16.00
Add to cart