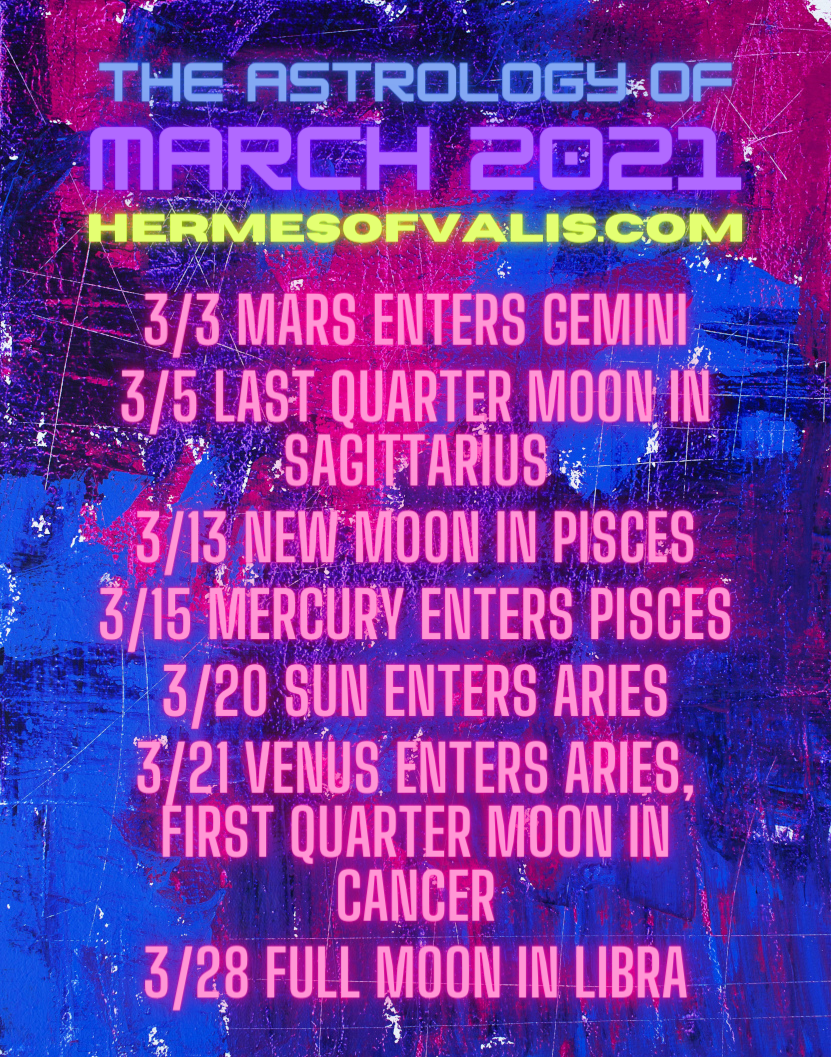 The Astrology of March 2021 drops us into Pisces season, with a dreamy New Moon in artistic Pisces happening on March 13. We can expect an increased focus on emotional and psychic awareness, creativity, and heart-centered connection this month. The heavily Aquarian-influenced period that we’re moving out of was a lot more cerebral in nature.

The change from Air element to Water element can be intense, especially as our heightened sensitivity develops. After not being in our feelings so much, we can to start to feel all the things, including the emotional backdrop to our thoughts and beliefs that we’ve been examining throughout Mercury Retrograde.

Mercury is still clearing the shadow of his Retrograde as we come off of the last New Moon in Aquarius / Full Moon in Virgo cycle. Hermes fully clears the shadow and finishes this journey on the day before the New Moon in Pisces, setting us decidedly in new territory.

Active Mars enters swift-footed Gemini at the top of the month on March 3rd. This inspires us to get busy even while we’re urged to dissolve and hang loose with the overflowing Piscean energy. The combination is very favorable for creative pursuits and going with the flow. It’s best to stay flexible with the excess of Mutable energy coming in this month.

Even though we’re feeling the Watery vibes, Mars (the actions that we take) will be clear, quick, and unmuddled in flighty Gemini. He can help us get through the giant to-do list that has been building up since the start of the year. We receive a welcome speed boost, and Mars in Gemini is anxious to get going after so long in slow-moving Taurus. He can also be easily distracted and take a lot of divergent segways, however.

Multi-tasking is favored and we’ll feel inspired by our curiosity as we chase new leads. Writing and debating may take on greater appeal or be easier to attend to under the influence of this energy. We’re more restless, impulsive and agile on our feet.

Mars trines Saturn on the 21st, which is the date of the First Quarter Moon in Cancer. This helps us direct our excited energy into more disciplined pursuits. Mars and Saturn in harmony is fantastic for business, school work, and any practices that you’re committed to and passionate about. Saturn can give some much-needed structure to chaotic Mars in Gemini, channeling and containing his energy.

A conjunction of Mars to the North Node on March 26 helps us tackle Mars-related issues in our lives. Expression of Mars energy can be passionate, heated, aggressive, sexual, or willful. The North Node is where we tend to grow and evolve toward over time, learning to handle Mars. This energy can lend power to learning Mars ways of being independent, assertive, and confident.

Mercury wanders into imaginative Pisces on March 15, coloring our communications and travels with a mystical tint. Intuition is strengthened and emotional awareness grows. Understanding happens on a deeper, subsurface level as we grapple with our feelings and become more sensitized to the dreamscape.

A stimulating sextile to Uranus on the 21st occurs during the First Quarter Moon in Cancer. This is great energy for developing those creative ideas planted on the New Moon.

Mercury will enter into a tense relationship with Mars, forming an exact square on March 23. Conflict and misunderstandings can come about as we rush about our business, unconscious of our thoughts and words as they spill out unfiltered.

A square to the North Node on the 24th serves as a reminder of Eclipse Season starting in the not-too-distant future. This year we’ll see Eclipses in Sagittarius and Gemini in May-June and November-December.

Spring Equinox occurs on March 20 this year with the Sun’s annual entrance into Aries. This moment sets the tone for the wheel of the year which begins at Ostara. We can look at the Aries ingress chart for a look at the energy of the year ahead.

Venus in Aries is all about the self-love. She is in her detriment in Aries, not as comfortable with ideas of separation and independence as Mars (the ruler of Aries) is. Although she does have some dignity here during her time in the third decan of Aries, from April 6 through 14. During this time we can experience great passion as Venus gives into the urgency of the waning Fire element and looks forward to her time in Taurus.

The Spring Equinox on March 20 is closely followed by Venus Cazimi, the Superior Conjunction of Venus in Aries. Although Venus is happily exalted while in Pisces, she spends her time here so close to the Sun that she loses some of her power and effectiveness.

Venus is combust until May when she will emerge as the Evening Star (visible in the night sky). Until then, her conjunction to the Sun on March 26 is an exception to her blight of invisibility; during the conjunction she gains strength, as she’s sitting in the lap of the King and has his ear.

The Empress of love and attachment will sextile Saturn and the North Node at the end of the month. This opens doorways to commitment and working on relationship issues.

The Last Quarter Moon in Sagittarius encourages us to work on understanding our changing beliefs and worldview now. Beneficial sextiles to Saturn, Jupiter, and Mercury in Aquarius allow us to come full circle with our Aquarian New Moon journey this past month. It’s a great time to check in with what we’ve been discovering about our role in community and other Aquarian themes at work in our lives.

The Quarter Moon squares Venus and opposes the North Node, asking us to stay flexible as we adjust to the changing atmosphere. The Sun squares the Nodes as well, serving us with a preview of the Mutable energy we have to explore with upcoming Eclipses in Gemini and Sagittarius this year (in May-June and November-December).

The Moon in Sagittarius

The New Moon is co-present with true believers in beauty, Venus and Neptune, on the day of their union.

The New Moon in Pisces comes in the wee hours of the morning. A sextile to Pluto assists us in releasing and letting go, while the Venus-Neptune conjunction dissolves boundaries and invites beauty and fantasy into not just our day but the entire month ahead.

The seeds planted on this New Moon will come to fruition during the Full Moon in Pisces on September 20.

The Moon in Pisces

With an inspirational Mercury-Uranus sextile happening on the date of the Quarter Moon, New Moon journeys can be brought to an exciting head today. Throw in a well-disciplined Mars trine to Saturn and we can have a very productive day, indeed. Check in today with where you’re taking your creativity. This is a wonderful day to brainstorm and strategize.

The Moon in Cancer

A Full Moon in Libra on March 28 brings us back to the Airy element. There will continue to be a strong focus on relationships and bringing people together; first through feeling our way through, then bringing the conversation and debate back to the table.

This Full Moon is the culmination of the New Moon in Libra on October 16, 2020.

The Moon in Libra