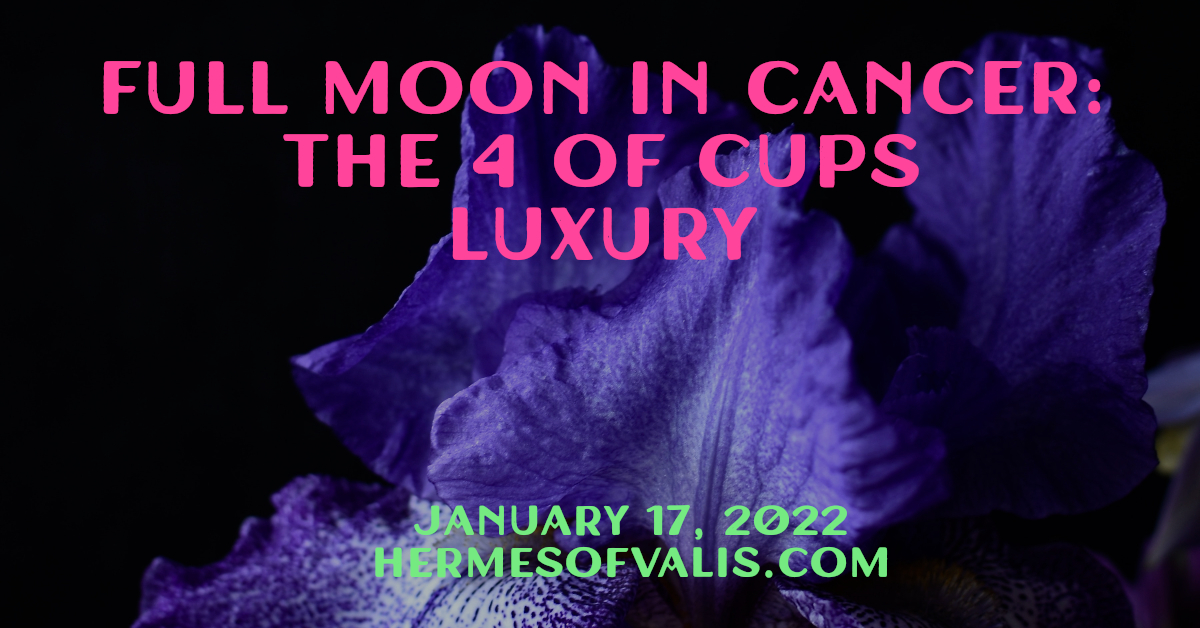 The Full Moon in January falls in the last decan of Cancer on January 17, 2022. This corresponds to the 4 of Cups card in the Tarot, the Lord of Luxury, ruled by the Moon and Jupiter. The Moon is of course at home in the sign of Cancer, giving this Full Moon positive dignity by sign and by decan.

Mere days before the Full Moon, Mercury has stationed Retrograde in Aquarius in an exact square to Uranus at 10°. At the same time, Uranus is stationing Direct! This can pull some sudden eruptions and surprises from Uranus into both the Full Moon and Mercury Retrograde cycle. Changes and insights will be especially sharp for anyone having important placements at 10° of Taurus, Leo, Scorpio, or Aquarius.

The Sun is conjunct Pluto during the Full Moon, lighting it up like a brilliant power source. We can take advantage of this intensity with Full Moon magick, getting to the heart of a mystery and illuminating the unknown. Pluto allows us to exercise control and will power, revealing secrets and effecting meaningful change and personal transformation.

Important Elements of the Full Moon in Cancer

Cancer is Rising locally during the Full Moon, a mighty boon that makes it a fine electional chart. Sun-Pluto makes for a potent brew which could be useful for getting to the heart of any relationship troubles. Insights can tie into Venus Retrograde in Capricorn, giving us valuable information about our goals, ambitions, and heart’s desire.

The 4 of Cups, Lord of Luxury

Being ruled by the Moon in her own domain, plus bountiful Jupiter, this final decan of Cancer is given the name of Luxury. The 4 of Cups shows our chalices overflowing with emotional richness. There’s a feeling of ennui that comes along with this card, though, suggesting that we can have too much of a good thing happening.

The figure in the card is being offered a gift from the gods in the form of a golden cup emerging from the clouds. But he already has 3 Cups before him and shows disinterest.

Mercury stations Retrograde in Aquarius on January 14. He’ll explore the territory between 24° 22′ Capricorn and 10° 19′ Aquarius between now and February 23rd, but his Retrograde ends officially on February 3. Because Chiron is at 9° of Aries, he sextiles Mercury right before and after the Retrograde station.

Mercury sextile Chiron helps us communicate and understand our healing process and soul growth. This is a great time to examine our thoughts and feelings about lessons we’ve been learning in our personal experiences. It encourages integration and personal evolution.

Uranus stations Direct at 10° 49′ Taurus the day after the Full Moon, which is quite a powerful effect. The Uranus station stimulates change, revolution and innovation. Something unexpected wakes us up and sometimes event jolts the ground beneath our feet. If you have any placements between 10-15° of the fixed signs, this time period around the Full Moon should be quite significant and action-packed. You can see some movement and shifting around themes associated with the House Taurus rules in your chart.

After the Full Moon, the Sun moves into Aquarius and Mars moves into Capricorn (on January 24th), where he finds his Exaltation. Mercury Cazimi on the 23rd in Aquarius initiates a new cycle for Mercury, the planet of mental tasks, messages, information, and mobility. This Cazimi moment is a good time during Mercury Retrograde to take action on any important Mercurial tasks, such as making an announcement or sending important messages.

The Last Quarter Moon will be in Scorpio on January 25th, the same day that Mercury Retrogrades back into Capricorn. This is a good time to check in with your progress on goals and any projects you’ve started during this lunar cycle (which began with the New Moon in Capricorn on January 2).

Mercury Retrograde is conjunct Pluto on January 28. Investigations can yield deep results at this time.

Venus stations Direct at 11° 09′ Capricorn on Saturday, January 29, although she won’t fully clear the shadow of her Retrograde until March 1.

We finally have a New Moon right at the end of the month, a New Moon in Aquarius on January 31st.