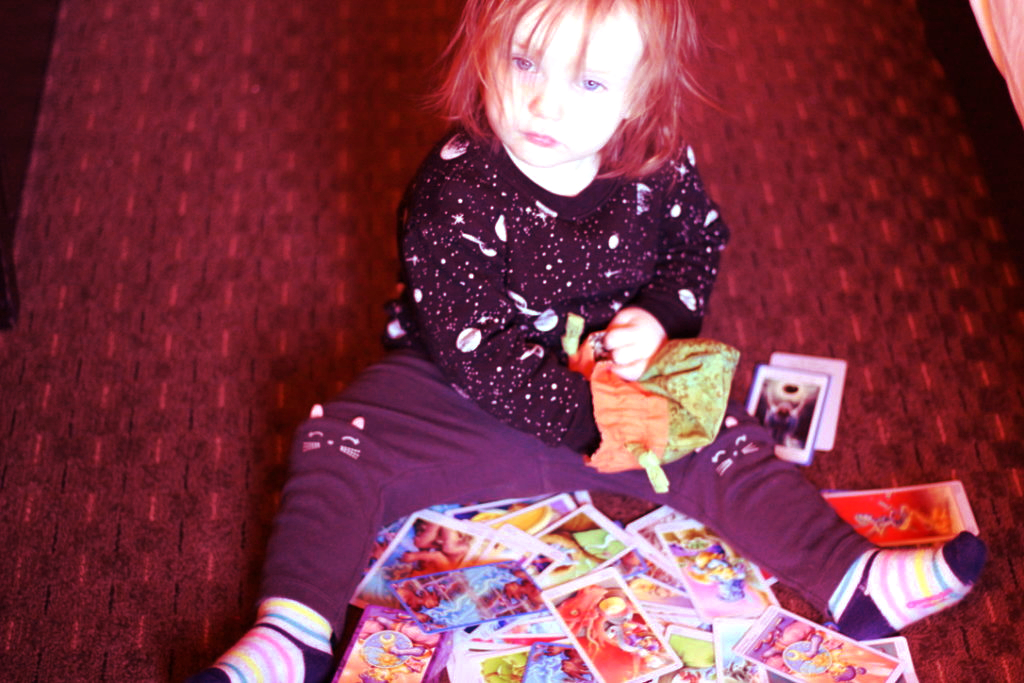 I grew up with the Tarot, reading an old Aquarian deck that had been in my family for a decade or two, starting at the age of 7.

This was a beautiful deck but in no way was it “mine.” I sometimes stole it away for weeks or months at a time, letting it live in my room and among my toys, but it was a shared deck – treated with a certain level of spiritual reverence, but passed around generously all the same.

I had access to this deck throughout my childhood and adolescence, to the extent that I didn’t feel the need to hunt down my own Tarot deck, even when divination became a daily and essential part of my life.

I moved out of my Mom’s house at 15 to live with my Dad, and ended up trading my daily Tarot practice for Runes. When I flew the nest, I realized that I’d been missing out on Tarot for far too long.

This led me to buying my “first Tarot deck” when I moved out West at 17.

I went into my then-local spiritual shop, Radiance in Olympia, WA. In their book section I found The Cosmic Tribe Tarot which called to me. At the time I was attracted to its psychedelic and tribal aspects, features that reminded me of my elder siblings and everything they had taught me that had expanded my mind in the last several years.

Where to Find Your Tarot Deck

The best place to shop for a Tarot deck, in my opinion, is a brick-and-mortar magick shop, if you can. Support small business and connect with your local magical community – it’s a win-win. If you’re anything like me, just entering a metaphysical shop will bring all sorts of warm and fuzzy feelings.

If your access to such shops is limited, you can try a larger bookstore or shop online. Online you have the option of buying from a publisher, an independent deck creator, one of many brilliant online magick shops, or an online retailer like Amazon.

Like my example above, you should listen to your heart when shopping for a Tarot deck. What is calling to you at this moment in your life?

Myths and Superstitions About Your First Tarot Deck

Naturally, with the amount of mystique surrounding the topics of Tarot and divination, there are a lot of legends and superstitions around buying and caring for a Tarot deck.

Probably the most prominent one, in my mind, is the belief that you have to be gifted your Tarot deck. In other words, it’s a no-no to purchase Tarot for yourself.

As most Tarot professionals I know collect dozens if not hundreds of decks, I don’t see this as being a particularly helpful superstition. I wish we lived in a world where people gifted each other Tarot decks all the time!

If I listened to this advice, I would have had to wait an additional 6 years before I could read Tarot after moving out on my own. Someone did eventually give me their old deck in exchange for a new one that I purchased for them. But I’m glad that I didn’t wait around for that to happen.

Another common thing I hear is that you should sleep with your Tarot deck under your pillow. Personally I haven’t done this. I get the sentiment – the connection with dream consciousness, etc. Though I would think that it would damage my cards.

Some people will tell you not to let anyone touch your cards, or they’ll get their negative energies all over it. Others will scold you for doing a reading without the questioner ever handling your deck, because their superstition is that a person must get their energy on the cards if you’re going to accurately read for them.

The number one thing to keep in mind when you’re buying or getting started with your first Tarot deck? Every reader is different and there are many styles of Tarot reading out there. Ultimately you have to do what feels right to you and carve out your own path.

Ways to Connect with Your First Tarot Deck

Once you have a deck in your hands, whether you were generously gifted one or you purchased one at your local metaphysical shop or online, the first thing to do is simply sift through it and get acquainted.

One way of getting acquainted with a new deck is to spend some time laying out the cards in their natural order, shuffling and reorganizing a number of times to get familiar with the cards and the images. Lay them out in piles based on suit and Arcana type. You will get faster at instantly recognizing the suits and cards.

Spend time holding and shuffling your deck. Familiarize yourself more with the images and the feel of the cards rather than jumping straight to the little white book or other guidebook that came with your cards.

The literature, keywords, and given meanings are important of course, but other people’s definitions will only get you so far. You’ll want to also approach your cards with an intuitive understanding. Try reading it without the book, even if your knowledge is limited.

For example, pull a card. What do you see? What does that image or symbol remind you of? How does it make you feel? If there is a figure in the card, what can you tell about its posture or facial expression or quality of its gaze?

Keep it close at hand. One common way of connecting with your deck is to pull a card every day. You might take some notes on what you think it means in the morning, followed by some reflection after your day is through.

Building a Relationship to your Cards

Beyond your initial introduction period with your cards, you may be ready to work with them more seriously.

One way to start doing this is to write down a thorough description of the imagery in each card, writing about what you see in your own words. Do this for each and every card! This can take a while, but it’s about establishing a practice or working with the imagery of the Tarot. It will enhance your readings.

Keeping a Tarot journal is a common and essential practice for the serious student or aspiring professional. You can keep a record of readings that you do and write down your interpretations, as well as continue to keep notes on your personal observations of the cards and their meanings.

It’s important to begin developing your own keywords that correlate to the known meanings of the cards but are not taken directly from a book (although there’s no harm in starting with somebody else’s keywords).

Treat it with care.

Some say to wrap your deck in silk and keep it in a box – the key message here is to treat your new deck with respect and care. The specifics of what this looks like can differ from person to person.

There are many cloth Tarot bags available on the market, or you may keep yours in an old cigar box wrapped in a special cloth. I have done both but, as a professional, I have dozens of decks scattered around my house and I keep them out of the box and uncovered unless I’m traveling with them. I do, however, usually place a crystal or gemstone on top of my decks.

Think of it as a friend, ask the deck questions about itself and your ways of using it, and build a relationship with it. One of the easiest ways to connect with your deck is to do a deck interview. This type of Tarot reading poses questions to your deck such as:

Most Tarot readers have a method of “cleansing” their cards. This is about clearing the energy that attaches itself and flows through your deck. Cleansing will allow for greater clarity and prevent mixed messages and the like from getting in the way of your readings.

For some this may be as simple as shuffling intentionally, which itself serves as a reset. Others take a more elaborate and ritualistic approach – smudging the deck with sacred herbs, setting it out in moon or sun light, or clearing and charging the deck with crystals and meditation.

Other ways of clearing a deck is by always shuffling in a certain way, sometimes handling the cards with a particular hand, or by cutting the deck. Cutting the deck means placing it in multiple piles and then putting it back together in a different order. Some people always will cut the deck the same way and even with the same hand (usually the left).

What you do before a reading will depend on you and your own style and methodology. This can take some time to come into, so be patient and have fun with the process. Experiment with different ideas. Don’t be afraid to do things the opposite of what you hear is the right way. Try something you’ve never heard of anyone doing before. Spoiler alert: there is no “right way.”

Some Rituals that I Practice

Honoring the elements is one thing that I always do while reading Tarot. The elements are built into the Tarot and my spiritual practice. Using the elements is a simple way of creating a proper setting and environment for a successful and meaningful Tarot reading.

Additionally, I often place them relative to each other in the direction ruled by each of the elements. I put Earth in the North, Water in the West, Air in the East, and Fire in the South.

Some people say an invocation before reading the cards. You may want to develop one, depending on your preference. I sometimes do this aloud and sometimes in my head. Other times I simply steady my mind with a good shuffle and begin.

For cleansing, I keep crystals on and near my decks. I also periodically smudge my decks with sacred herbs. Some examples are bundles of sage, juniper, rosemary, red cedar, sweet grass, or mugwort. I also use sticks of palo santo.

The simplest type of Tarot deck to start with is the Rider-Waite-Smith (RWS) Tarot. Also its so-called clones: decks that follow the same general deck structure. Look for a deck with relatable imagery on the Minor Arcana. It’s easier for a beginner to start to interpret a man holding a globe and looking out into the distance than it is to interpret two crossed, glowing wands, for instance.

Golden Dawn style decks like Aleister Crowley’s Thoth Tarot tend to be more esoteric. This can be a little harder to penetrate for a beginner. These esoteric complexities also exist in the RWS system, but are obscured behind visual images that are easier to read intuitively.

Marseille style decks with nonillustrated pips may also be more difficult for beginners.

Branching Out and Collecting

Once you’re familiar with your Tarot deck, you might want to start branching out and expand your collection. Especially if it’s become a regular part of your life.

Have fun with this! It’d be hard not to.

Have you bought your first tarot deck already? If so, what was it? Do you still only have the one, or have you started a collection?